Sophie Barrett recently had an email chat with Chad Stock, the grand experimenter over at Omero and Minimus on the relevant topic of… reduction. 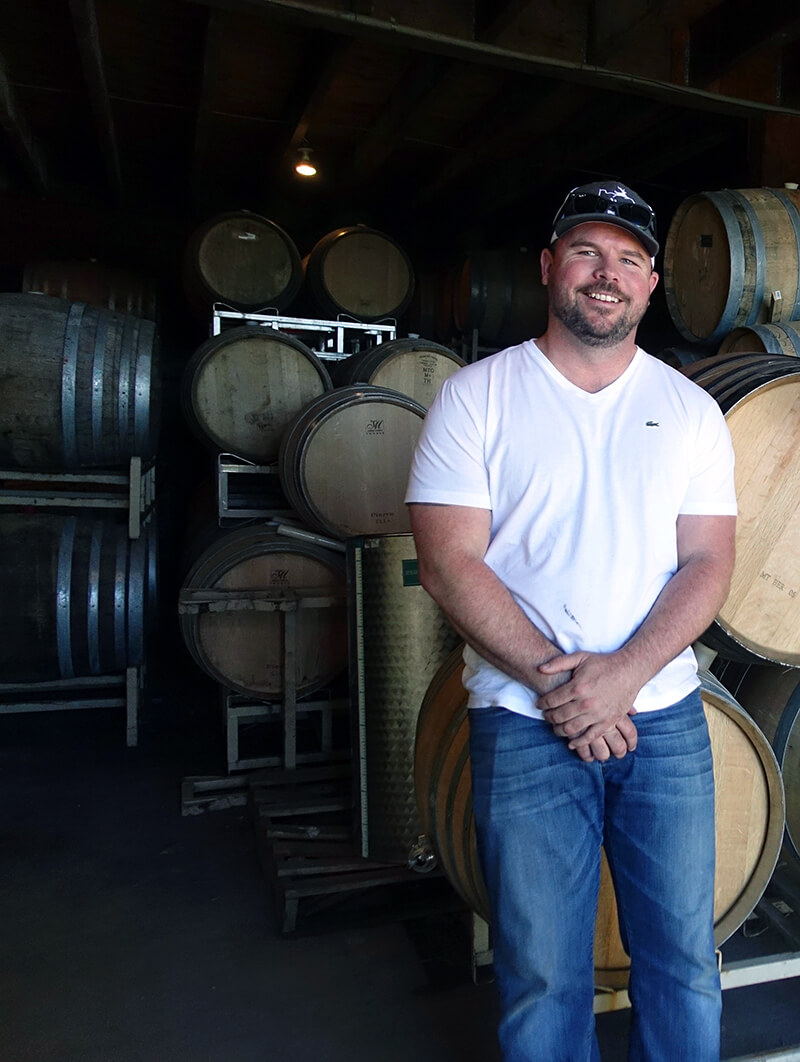 Is there a difference between the matchstick reduction of white/sparkling wines and the poop-y reduction of natural reds?

Yes there is a difference. Sulfide chemistry is incredibly complex and although there are known paths of chemical reactions, think domino effect, there are many unknown paths, which are indirect and/or not understood. In the case of both the matchstick and the poop, you are talking about understood direct reactions that are well documented.

Matchstick reduction is formed in wine when too much sulfur is added to the fermenting juice. In the case of highly protective winemaking used for white wines, high sulfur additions in the juice during fermentation are common so this is generally the cause. Some winemakers try to induce this quality in their wines. It’s quite common in chardonnay made in many regions across the world because small amounts of matchstick in the wine profile can appear mineral-like or flinty, but it’s just a winemaker trick to make you think you’re experiencing mineral terroir.

Poopy reduction is directly formed from the development of H2S during fermentation. This can happen in any style of wine if the fruit is compromised with elemental sulfur sprayed in the vineyard too close to harvest. It can also happen due to an amino acid imbalance in the fruit that can cause certain less desirable amino acids that contain elemental sulfur to be consumed by yeast during fermentation, releasing the sulfur of the amino acid in the form of H2S as the yeast dispose of the sulfur. The H2S can then shift its form into stinky poopy-like aromas if the fermentation and resulting wine are handled too anaerobically when the H2S is present. This is the form of reduction that I’m pretty sure no one appreciates, not even me, which is saying a lot, and what I believe most professionals have on their mind when they are thinking of the bad form of reduction.

Are there grape varieties and soil types that are inherently reductive?

Syrah and tempranillo are known for being highly prone to complex reduction. This is what we commonly see as bike tire, electrical fire, charred meat, and smoke aromas. Granitic and volcanic soils in my experience present the most reductive expression in the Willamette Valley and in the Applegate Valley. I’m not sure why these soils are prone to this, I can only comment based on experience. The basalt in Oregon is particularly intense but its generally noble reductive qualities increase the life of a wine.

I believe, and have observed, that there are certain forms of sulfide reduction that manage to undergo a transformation process in which they resolve themselves over time. During that time of resolution they consume large amounts of dissolved oxygen in wine, which slows down the oxidation of fruit and other aromas that we associate with youth and freshness. In the cellar, a conventional winemaker would likely try to give the wine oxygen in barrel if they saw any form of reduction, and large amounts of air in a short period of time are usually devastating to the wine unless it is used to battle H2S during fermentation. Slow controlled oxygen seems to be the trick to managing a balance with the more noble forms of reduction, which can occur in bottle under natural cork, or in large older barrels that breath slowly. The formation of these noble reduction compounds do not come from the H2S pathway and generally present themselves as umami notes both aromatically and on the palate. When they appear I know I will have a long haul wine.

When is reduction related to sulfur in the vineyard/depleted nitrogen?

If you are referring to the specific amino acids generally documented, I believe we would be focusing on a lack of Cysteine and Methionine. These are the two primary sulfur-containing amino acids that make up proteins. When these amino acids are consumed by yeast in large amount due to lack of proper nutritional value matched to the yeast chosen for fermentation, you can develop a lot of H2S specific reduction issues. This is an issue that can apply to both non-inoculated (native) and inoculated yeast fermentations but is much more common and severe with inoculated fermentations.

Can racking get rid of reduction and if so, when should you rack and when not?

For me, the only reduction I am afraid of is during primary fermentation. If I detect an issue with a white wine in barrel that is reductive, the cause is usually due to having too high a level of press solids in the barrel which acts as an oxygen sink and in combination with a saturated CO2 environment from fermentation trapping the gas in the barrel. In this situation racking to remove some of the solids in the barrel can be an effective tool. Racking can also refer to removing wine from a red fermenter to splash it around in a different open top tank to blow off CO2 and cool down the fermenting juice. When the aromas come back into balance the fermenting wine is then returned back to its skins, which is what we call this a “rack and return”.

Racking in barrel when a wine is finished fermenting is a different story. It really depends on the form of reduction you are working with. I have generally found that reduction aromas in young wine are in the wine itself and not in the lees. Lees are the healing source for most things in wine so I am hesitant to rack off finished wine. I like to sample the lees on the bottom of a reductive barrel of wine and taste them; if they are clean smelling and tasting then I will stir the wine in barrel because I have found in this case the lees will clear up the wine. If the lees are reductive then it may be the cause of the reduction and removing the wine from the lees could be a good thing. If I rack I will replace the lost lees with clean healthy lees from another wine to maintain that relationship. Conventionally speaking, a wine would be racked off its lees based on sending the wine to a laboratory for testing to identify what the specific sulfide form is, which can inform you whether racking will be smart.

Yes, stainless steel definitely promotes reduction. The lack of oxygen transfer through stainless steel contributes to anaerobic conditions for fermentation and aging. Most stainless steel tanks are also large volume, and in the case of white wine tanks are very tall compared to their width. The electrochemical potential (ECP) of wine changes with the height of the vessel, the taller the tank the greater the potential so the wine in a large tank must be redistributed regularly to rebalance the wine. In small vessels such as barrels, amphorae, and cement tanks the ECP is very low and usually does not contribute to the issue. So material of the vessel is important, but the dimensions must also be considered.

I’ve heard that Richard Leroy in the Loire—who encourages a certain amount of reduction (even though he uses no stainless)—finds that slightly early picking has an impact on this. The reason is that the grapes are less oxidized. Thoughts?

Yes, picking early has an impact on increasing reduction, at least in Oregon I can say it does, so in other regions it must as well. The oxidation part is a new concept to me; I’m not sure what that means. It would be a local knowledge thing that applies to his ingredients and his terroir. I can’t explain his theory without speaking with him directly. I could contribute that early pick fruit may contain less nutrient which may increase reduction. There may also be less time between the last sulfur spray so there could be residue present.

Does spraying, particularly Bordeaux mixture/sulfur, close to the time of harvest have an impact on reduction?

Yes, as stated above elemental sulfur plays a large role in reduction during fermentation so spraying too close to harvest is never a good idea especially in dry, arid climates. Bordeaux mixture, which contains copper, brings in a whole new level of chemistry and discussion. Copper will counteract the reduction caused by the elemental sulfur so if both make it to fermentation it gets really interesting. Copper is a strong oxidizer and it’s nasty stuff to be adding to a fermentation ever in my opinion, but to have it make its way into your fermenter from vineyard residue in an uncontrolled and uncalculated amount is a stupid idea. Another critical time to not spray this mixture is during bunch closure to avoid residue being trapped inside of the clusters, which may not weather away before harvest.

How do you play with reduction and why? For flavor? Longevity? Do you find certain soil types or particular vineyards tend to be more reductive? If so, why?

It’s mostly about flavor for me, I believe that reduction is an important element to wines that pair well with food. I suspect that the presence of umami in wine is directly related to complex sulfide chemistry and amino acids, so I’m willing to go further down the rabbit hole than most. Longevity can be a bonus, Minimus #5 “Reduction” is only getting fresher and more fruity as it ages and it’s now 7 years old. DMS is Dimethyl Sulfide, the sulfide compound most commonly associated with Burgundy and creates the mushroom and forest floor aromas in the wines. The precursors to DMS smell super savory, gamey, umami, like fish sauce or some kind fermented asian food condiment. I believe the DMS in #5 Reduction is responsible for its longevity.