“If only I could photograph its aroma and taste,” I said mournfully. And for the first time in a long time I understood with my blood why the Krug Grande Cuvée was the desert island wine of many. There are bottles that bring you to your knees, that make you a believer or something. Anything. Or at the very least, this. 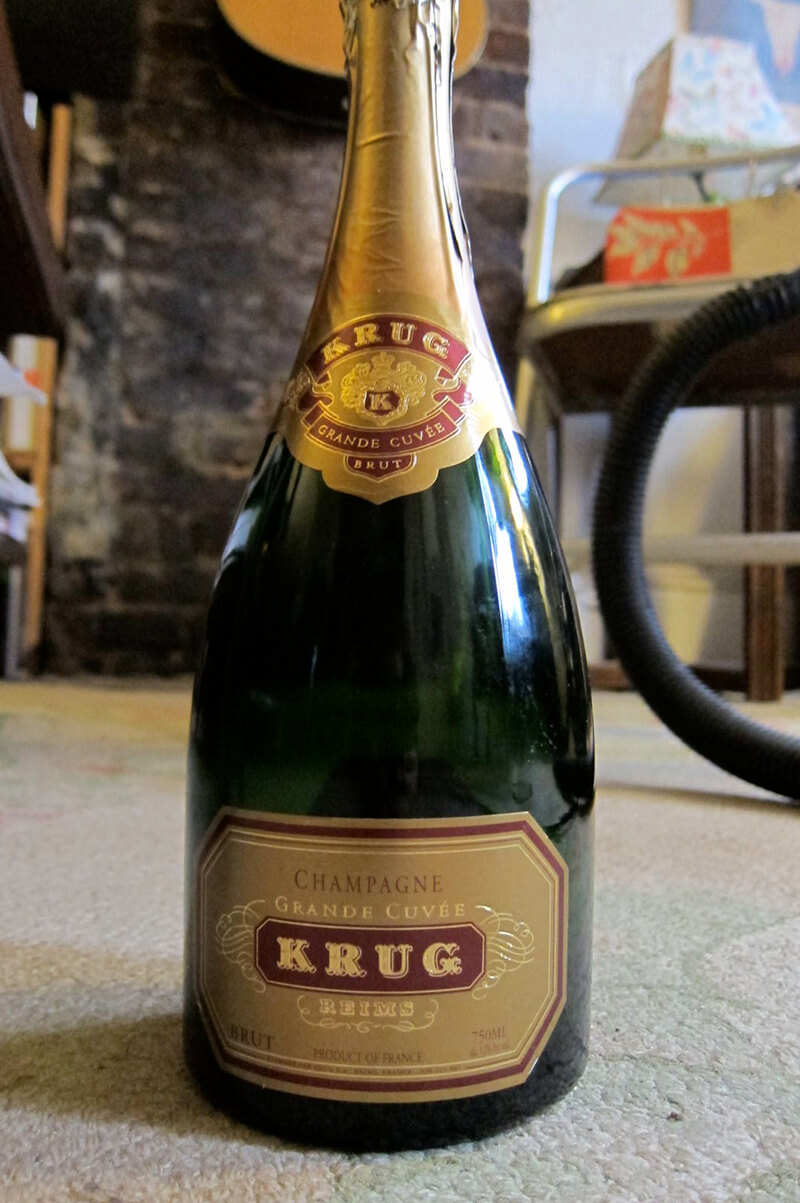 Once upon a time, I was spoiled with Krug.

I had a friend who worked with Clicquot. When parent company LVMH bought Krug from Rémy Cointreau in 1999, my good friend added Krug to the wines she shared with me on her entertaining budget, when she came to dinner, or at parties or wherever. She didn’t hear any complaints.

But, she, a loyal girl like her then boss Mireille (French Women Don’t Get Fat), was devoted to La Grande Dame. Mireille had a hard time with Krug, after all she practically birthed the Yellow Label and my friend started to feel guilty when she started to prefer Krug over Clicquot, as if she was the daughter of divorced parents and she was caught actually liking her dad’s new girlfriend.

She resisted her affection at first and would try to persuade me, “I know you don’t like Yellow Label,” and then she upped the ante, “But the vintage is really excellent,” and finally she conceded that even Grande Dame was not as good as Grande Cuvée.

I didn’t have any baggage. I was thrilled with my good fortune from the first pop. And for years I had Krug in all shapes, temperatures and formats. I was adept at young NV and at aged NV. Young was fantastic, older was glorious. Whenever in Champagne I visited. I tasted their old stocks and even was there for a blending session. Blind tasting Krug was easy, lime/meyer lemon-like acidity. Period. Joy? Period.

After Henri retired in 2002 the rumors started. A man, a videographer obsessed with wine, threatened death to me (really) if it could be traced back to him that Krug was working with stainless instead of wood. I tried to suss it out and immediately received a FedEx letter from Krug denying it. I was never able to confirm it. But the taste slowly started to be dialed back. Less rich. Less complexity. Less family.

Henri Krug retired. Caroline Krug, who was treated shabbily by the New York City Clicquot office, retreated to Paris to work on another LVMH brand. Her father Rémi was soon out the door. By the time Mark Cornell came on board in 2003, the brand’s taste, was deescalating. Krug was heading into its next phase; more dream and branding, less in the bottle.

I tried to tell part of the story in my book The Battle For Wine and Love and so tracked down the then head of Krug, Mark Cornell.

He told me how excited he was to be taking Krug into the twenty-first century. LVMH had initially hired him to revamp the cognac house Hine. “But for LVMH to take over Hine meant to ruin it,” he said. “It is a small house. A fine house. I couldn’t ruin the brand. So I updated it and found a good buyer. We could have made more money by selling it to a Russian firm, but we went with less money and a better buyer.”

I said, “To take a phrase from the sixties, ‘If you love it let it go?’” He was polite to laugh, because it really wasn’t funny. From his story I gleaned that he thought he couldn’t bring himself to ruin Hine—but Krug? Perhaps that he could ruin.

Under Cornell’s reign, LVMH killed off Krug. I’m not sure of the method; whether their base wines are younger, more stainless, or more technology, but the wines are simply now coarse to my palate and sometimes unpleasant. But this bottle, probably bottled in 1999, aged up in my apartment for a baker’s dozen in terrible conditions, lived and mellowed and deepened in only the way a wine with breeding could do, was a reminder of the glory that once was. The night was filled with champagne from other houses great and small. I parceled out the sips and we genuflected.

I couldn’t photograph the taste. Recording it in words seems ridiculous, shallow, simply impossible. But it was a waking dream, and one I’m trying to hold on to.

I’ve sung your eulogy before.

But I do believe in spirits and if you ever come to visit me again, my third eye will be open to receive you, and I’ll have a glass on hand.