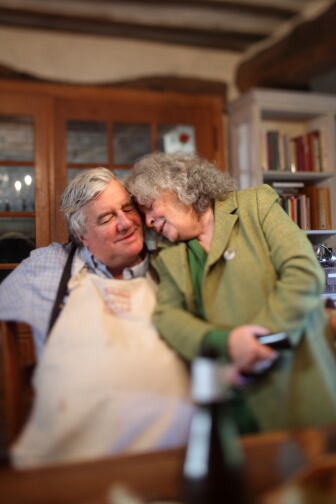 At lunch with Becky and Russell

Today is the very remarkable Becky Wasserman Hones’ birthday. Being stuck here instead of over there in France where I should be, she is fiercely on my mind. Our connection was one of meeting the myth that became beloved family. Becky, with her musical voice and deep wisdom, mirth and view. So today, I dug into the archives to remember an idea that never came to pass but it was a quiet and sublime afternoon. And tonight, I’m thinking about endive mornay, and dammit, I’m going to try to channel Mr. Hone’s skill and make something grand.

Back in 2011,  the photographer Clay McLachlan  and I were contemplating a book project.  To mull over the possibilities he traveled down from Paris to meet me at Becky and Russell’s place in Bouilland.

Don’t know Becky Wasserman? Having landed in Burgundy in the early 70’s, she took the alternative route (you’ll have to wait for the film version)  and eventually started Le Serbet (Becky Wasserman Selections)– the first prominent women on the business side of wine. A tiny bundle of energy, she nurtured almost every nascent pinot noir grower in the U.S., including David Lett & Eyrie Vineyards and Josh Jensen & Calera. She was the American connection to Burgundy, they all felt safe leaning on her for connections and advice. But those on her side of the pond listened as well and she is  the past and present Godmother of many prominent, passionate and inquisitive Burgundy vignerons. Her story has been told many times, her influence is far from sung.

But her reach also stretches to food and over the past two decades, Becky and Russell’s homey yet humble 14-century stone barn in Bouilland (population 120 with just as many cows) has become the coveted dining invitation in the 35-miles stretch of the Côte-d’Or.

Well, at least it’s mine. Maybe David Bouley’s as well.

I once observed the New York City-based chef chowing down on Russell’s rustic beans and saucisson while I was waxing poetic over a smoky kedgeree. (Russell says the important ingredient is the nutmeg.)

After a long morning hunting an aligoté story, I drove in on the white gravel, eager to see what Russell had conjured up for lunch. I climbed out my little red rental and walked past the mountain of spent wine bottles, creaking open the door into the Wasserman/Hone narrow kitchen.

Inside, Clay was snapping away, his massive lens trained on what was to be one of the dishes,  shiny mackerel.

“What do you have there?” Russell asked me, seeing me put a bottle in the refrigerator.

Teasing him, I told him, “I’m not telling you. You’ll taste it later.” It was one of those no-sulfur wines he loved to make fun of, but I knew this one (the unsulfured aligoté from Claire Naudin)  would knock his socks off and it is rare I can show him something he didn’t already know.

Russell has some girth on his 6- foot -seven frame. His red suspenders on, he tilted on his cooking stool, tended to the sizzling croutons for the salad and said, “Alright then, Madame, get yourself a glass, and one for Clay, if you’re going to be like that.”

Dear Russell has encyclopedic knowledge of wine, an old-world palate and he can choose for me any day. Very soon all three of us were sipping a rich and lemony 2002 Jobard Genevrières  and Russell was dishing on how Burgundy had changed since he showed up on Becky’s doorstep, unannounced, with two suitcases, saying “Honey I’m home.”

And of course, he prepared a pan just for me, without the ham. That didn’t stop him from complaining bitterly all along, “It’s time you started to eat meat.” Then he continued on another rant as he started on another non-Alice friendly dish, but appropriate for the time and place, a bacon dripping and lardons rich, Salade du Vignerons.

“Sure there’s the Beaune Marché and the heirloom vegetables and the biodynamic greens man but do you know I can now get better produce in the supermarkets of England than France?” he complained. “It wasn’t too long ago when you’d be invited to lunch on the fly around here and the lady of the house would apologize for the simplicity of the food. Then out came a delicious terrine, then a puckery chicken, then farmhouse cheese. It was all their stuff that they grew or made or their friend grew or made. There used to be routiers, the truck stops where the food was cheap and very real. Now, everyone is competing for the locals so the dish of the day has to be 9 euros but what you get is this nasty dish of precooked whatever.”

Finally, Becky who had been in Dijon for a meeting, arrived burst into the kitchen. She had her hands stuffed into the pockets of her emerald green smock, looking as if she just had a terribly amusing thought, like how this tiny woman from New York came to live such an extraordinary life in Burgundy. She went for the dishes to set the table outside on the last warm day of the season.

Then he poured the Gruyères rich mornay sauce over the nestled endive.

Finishing the salad was next.  The croutons crisped, the bacon in strips crackled in the pan.

The salad already slightly dressed with mustard, olive oil and vinegar. Hot bacon thrown in, after all it was the main show, bacon fat drizzled on top. The loud sizzle transformed the dish into what I’m sure was a deeply, satisfying cross between the raw and cooked.

-all photographs by Clay McLachlan

Many local recipes call for celery and cheese and soft-boiled eggs, but frisée is the preferred green for Becky and Russell. This is a silly easy salad to make and along the line of simplicity makes for deliciousness. The secret is not to skimp on the essentials: make your own croutons. It is a cinch and the crunch makes the dish.

Salt and pepper to taste

1. Clean frissée and dry it in a kitchen towel.

2. Prepare the dressing: In a small jar, mix the olive oil, vinegar, mustard, salt and pepper.

3. Cut a slice of French or Italian bread into cubes. Toast on medium high heat in a small saucepan with a teaspoon of melted butter. Do not stir bread unless to turn to a different side once one side is toasted.

4. Put the greens in the bowl. Cut the eggs in halves or quarters and lay them into the salad, careful to not break them.

4. Fry out nice sized lardons until they are crisping over medium heat.

5.While cooking dress the salad, just a little, you can always add more later but you won’t want to get soggy.

6. Pour the bacon and the hot drippings all over the salad. Listen to the sizzle, and serve.

And for me? Well, don’t worry. I was fed very well. We forgot the endive, there was so much food (it appeared at dinner.) And of course there were the