The Semiotic Square of (Wine) Lovers 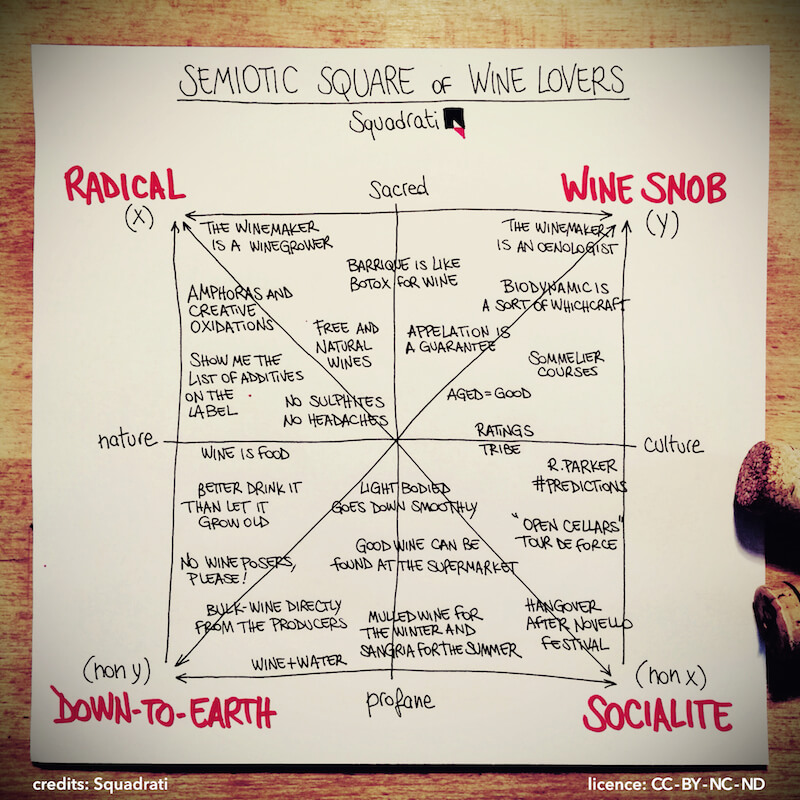 Forget down-to-earth, I’m a radical! I can live with that.

At first I thought it was an April Fool’s present, and it was kind of cool. Someone broke down the wine world according to taste and symbol in a most amusing and accurate way. Then I read the press release. It’s legit. In fact, Bosco Viticultori will present their commissioned box and its meaning at  Vinitaly, Monday April 7th, 2014 at 11:00 a.m.

According to the press release they contracted with Squadrati, a market research firm, to develop this ‘tool’ because “detecting these behaviours with clarity is essential to fix the strategies satisfying the many consumers’ requests and reacting to the negative trend characterizing the National market, and injecting a new value to the whole wine production chain.”

Forget the run-on sentence, I wish I were going to be there to see how this fascinating manga-like breakdown of the drinker is going to influence their marketing. What will they do? Produce a wine directed to each quadrant? Identify your wine critic most useful to the quadrant you want to reach and court them? For the radical wine, promote it through radical magazines and events? Would the socialite like to be told that they only like wine that is perceived as glitz and no substance? So, for instance, that would be the way they would woo McInerny, who is writing about wine in Town & Country now, invite him to a Novello tasting and give him remedies for the hangover?

The Wine Snob is the flip side of Radical, but likes predictable wine.

Socialite is just the other side of the coin from Down-to-Earth; wants chocolate milk posing as wine (this category seems squishy).

And the profane and the sacred? Opposites but oh-so-delicately so.

The possibilities are endless.