Back in 2008 this essay of mine was published in The Washington Post. What can I say? Many of us have failed parents, but they are our failed parents. My dad. I could write a book, and maybe I will. Phil had an edge to his own humor, and even though like many, he lacked the ability to laugh at himself, I think he would appreciate the fact that I pull this out of the closet, not just on Yom Kippur but on the anniversary of his death. 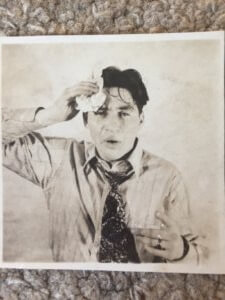 That’s Dad above, for his high school yearbook, pretending he’s sweating bullets on the debate team, the year he persuaded my mother to fall in love with him. And if you want to read the essay, click that little Far From Kosher below. G’mar Ktima Tova, y’all.