Addendum: This post was first published in March 2014. On June 4th 2014, the verdict on the Olivier Cousin case came through: guilty of putting the name Anjou on the label, but his fine? One euro. And so to read more about the issues and the attorney who handled his case, I introduce you to Eric Morain.

Impressed by the handling of the Olivier Cousin case, I stopped in to talk to lawyer Eric Morain when in Paris this past March. 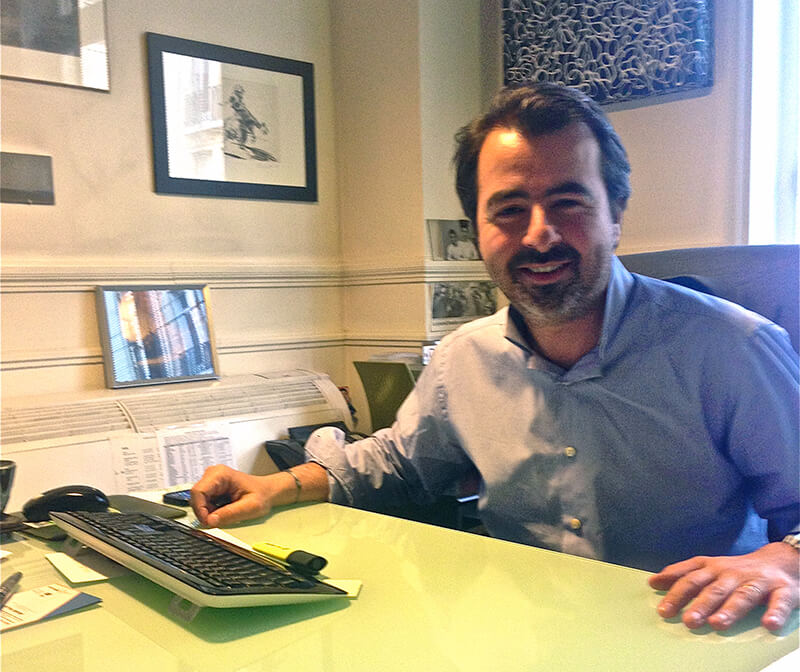 With a case of Frank Cornelissen 2009s resting against the wall, the avocat sat behind his desk in his art-filled office. His handsome cherubic face is angled in by a gently silvering beard. Mail constantly beeped into his computer. With the help of my friend Alon Rozen who is acting dean of the ENPC MBA, Paris, we started to talk about life, natural, Voltaire, French and wine.

Fraud was the primary issue in the case. Accused of sticking the region’s name, Anjou on the bottle (as in Anjou Pur Breton), Cousin then removed it from the label and snuck it on the cork.

Because Cousin left the appellation and bottles under Vin de France (wine-can-come-from-anywhere de France) it is forbidden to put his wine’s origin on the label.

This might be fine for industrial wine, where the grapes can be culled from anywhere in the country, even from someone’s bathtub. But what about wine such as Cousin’s, that come from his own biodynamically grown grapes from land in the family for generations?  After all, his wines are ones that have raised the reputation of Anjou.

I was curious whether this trial could change future wine law. Could the findings, if Cousin was successful, change the laws of Vin de France to permit place on the label? In fact, could the case lead to a way to separate the industrial Vin de France from the artisanal?

Morain assured me nothing could change. “We are not trying to prove he is innocent, he is not.” The lawyer sounded very talmudic  when he added, “Here the argument is about the spirit of the law, not the law itself. We can’t win the case, but we can win a reduced fine.”

The irony of the case was prominent for Morain. “I call this the boomerang effect,” he said. “Terroir is monopolized by the AOC, and they’re using it as a boomerang against Olivier. They appropriated the notion of terroir, they stole it. Today Anjou is an artificial notion of the region.” Then he added, “Do you know that someone is also being sued for creating Anjou cola?” He shook his head at the absurdity.

The AOC and the Wine Fraud Committee is in attack dog mode of late. Morain knew of ten court cases currently threatening French vignerons and cavistes. He missed representing Emmanuel Giboulot’s (forced spraying case) because he was on vacation at the time. But there are others coming and Morain will be trying four of them before June.

Take Saint Aubin vigneron Dominque Derain. He is in hot water for bottling his 2012s fifteen days earlier than the AOC allowed. He will most likely have to rebottle his most prestigious bottles, Pommard and Gevrey as a Vin de France and pay a to-be-determined fine.

The other case Morain referred to was that of the Toulouse caviste and bar à vin, Les Temps des Vendanges. Very much like the Enoteca Bulzoni case in Rome, they were hauled in for deceiving the public because of their signage that stated natural wine.

“We might as well be North Korea. Imagined that this is happening in the country of Voltaire!”

French hero Voltaire exalted the concept of human freedom and argued that no authority should be immune from challenge by critical reason. Ironic indeed.

While Cousin’s and Derain’s cases are about illegal labeling, the issues as Morain sees it is all about the attack on natural wine. He pointed out that under the European Union, the word nature and natural had been so codified that its meaning has become polluted and destroyed and France has done nothing to protest. In addition, this codification is only extreme for wine. “For example, you can write natural on a yogurt even if it’s industrial and packed with chemical ingredients. The word natural is only denied to wine. If the word ‘naturel’ is going to be allowed for wine, it is France who would have to go to Brussels and petition for a change, not the individual.”

Listening to Morain, the fashionable Avenue Montaigne just outside his window, the image of Kronos eating his sons came to me. 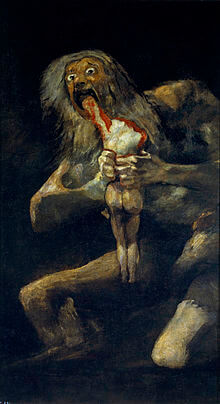 Was France eating its natural winemakers just as Kronos ingested his progeny? After all the Fraud committee, the INAO, had been in attack mode. InterLoire, the marketing arm of the region, had just published a map of the region omitting Bourgueil, Montlouis, Fiefs Vendéens and Cheverny. Yes, France as Kronos, it made sense to me that France was very much like the Titan who ate his sons fearful they would grow up to kill their father. But France has it wrong. The vin naturel folk are not killing French wine, they are saving it.

It is because of producers such as Cousin that the Loire has become so well known. It is because of those working naturally that depressed areas like the Muscadet have started to proper and thrive. It is why Anjou, dominated by commercial, chemical producers, that the area has new life. It is these wines and producers who have captured a generation that was on the verge of decamping to vodka. Go to Brussels? No, Morain said, it won’t happen.

Morain said that his client was not trying to be a spokesperson of a movement. He was not trying to attack the AOC. “Look, 10-15 years ago, when the natural wine movement became this ‘thing,’  the AOCs looked internally. “They started to protect itself from anyone who wanted to do something different, and this meant natural wine.”

Morain said Cousin had this idea to create a new category for artisanal wines. This thought keeps on coming up. Last week I heard that Claire Naudin in Burgundy is working with the BIVB to form a new definition of wine, one that can have the Appellation but would have a sticker that would say something like not typical for the AOC but worthy. Cousin, believing that was the answer as well, went to do something about it.

At the beginning of this court affair he and another vigneron, Bernard Belhassen of Domaine Fontedicto, paid the consumer protection office on the national level a visit. “They walked into the meeting with seven administrators with magnums of their wines. They wanted to show them what natural wine meant. What it tasted like.The first question the council ask him was how many people do you hire and how many people they represent?

Morain laughed at this concept. “The administrators used the winemaker’s artisanal qualities as a flaw,” Morain said. “These people are individuals who don’t have the time to organize into a group. How many people work naturally in France? There’s no number. No one is tracking this. They don’t represent money so to the council, they don’t count.”

But they were not unsympathetic, merely clueless. Morain said the administrators retorted, “What are you talking about? Bio wine was passed in the EU. Aren’t you happy?”

He saw me look over at the Cornelissen. “Do you know the wine?” He asked. Of course I did.

“We both know,” he said, “that once you start hanging out with people who like to drink and make natural wine you understand the difference with the other wines. People who don’t drink natural wine have no idea what it is and they attack it. What is needed is education. But the alcohol lobby is so powerful, they’ll never allow the education. That’s why the confusion between organic and natural is so profound, people aren’t allowed to know.”

The only answer he said, was  an ingredient label. “The wine of France is the only food product that doesn’t have to list ingredients. Even mineral water has to have ingredients. If the five big chateaus had to list what they put in, this could threaten the whole wine establishment.”

At the end of the 45 minutes, as we were leaving, he surprised me by telling me that he had read my books. I was touched and highly flattered. Morain, despite his fancy 8th arrondissement address defends the little guy, the individual who is working with a horse and adds nothing. He himself came to natural wine a few years back though Omnivore food events. “I met the winemakers, drank the wines and realized that few people were focusing in wine law, and no one was on the side of the small vignerons,” he explained.

They might not be his best paying clients, but he does get to drink well and sleep well at night, knowing he’s upholding the ideals of Voltaire and the truth of France.